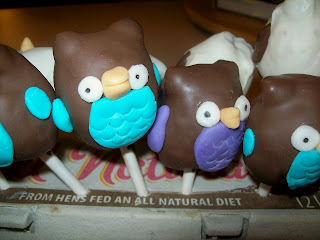 I really like making brownie and cake pops.  They allow you to be artistic and children, young and old, get a kick out of them.  I tried doing these for church on day, but I just didn't finish in time.  They ended up accompanying me to a Kinect Dance Party with the girls.  Whooo wants one?!

Since I did this late in the evening I didn't have natural light for photography so the pictures came out even more amateur.

I made the brownies earlier in the day, for a candidate (yes, we've had a lot of those it seems).  I saved all the "inside" brownies, the ones that weren't corners for the pops.  I removed the crusty tops of the brownies.  I think the pops taste better this way.  Then to help with the molding, I put the brownies in the microwave for 10-15 seconds.  This melts the chocolate chips inside the brownies which makes a great "glue". 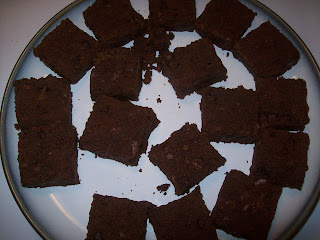 Now squish the brownies between your hands and form an oval or egg shape.  Feel free to wear gloves as it can be messy. 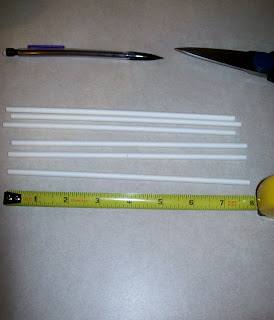 Next, pull out the lollipop sticks for the number of brownie pops you will need.  I had longer sticks and I chose to cut them in half. 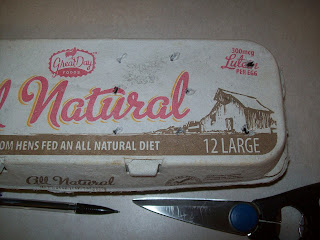 I also took an empty egg carton and poked small holes in it with the edge of a knife to hold the pops while they dried.  Styrofoam works better, but I didn't have any on hand.  Someday soon I'll have the hubby make a piece of wood into my stand but until then... 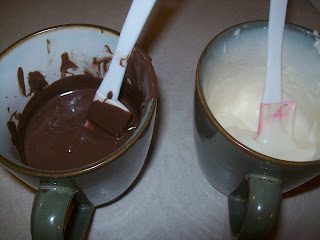 Melt your coating in coffee mugs or microwave safe bowls.  Most people use candy coats by Wilton.  Some people choose chocolate, but if you don't want it to melt easily then you must temper the chocolate.  That takes time.  Instead of these options I went the cheapest route and bought vanilla and chocolate almond bark.  Almost all my plastic spatulas are stained with various food coloring.  So don't be alarmed if you see pink.  I also tried coloring the white bark with a gel color which works great.  Alas, I thought it was too dark so I added water based white color, forgetting that water and chocolate do not like each other.  It seized and that was the end of attempting that. 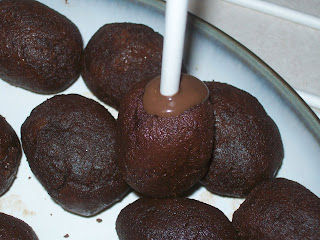 Now that every thing is ready, dip one of you lollipop sticks in a chocolate and poke it gently into your brownie egg.  I let them dry on the plate for a few before I placed them upright in the egg carton. 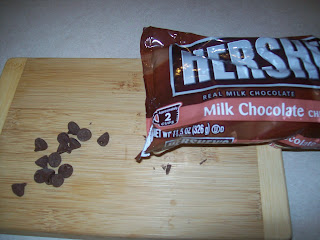 Next was the ears.  I used chocolate morsels attached with chocolate to the tops of all the pops.  I recommend after this popping them in the freezer for around 15 minutes.  With the chocolate bark I did this and with the vanilla bark ones I did not.  Since milk chocolate has a low melting point, the ears melted upon contact with the hot bark, resulting in saggy ear syndrome. 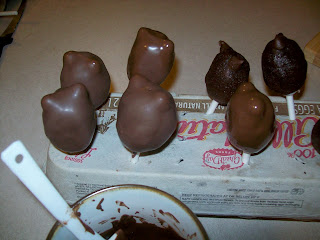 After removal from the freezer, begin dipping the owls in warm coating.  Let the excess drip for a few moments from the edge of the ears.  Place upright in the carton to set. 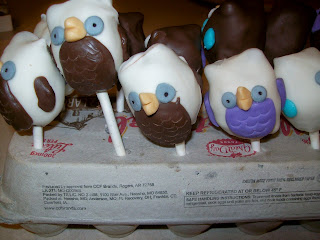 Now that they are dry, you can add the details!  For the white owls I tried to add chocolate bark bellies by melting some bark in a plastic baggie and cutting the tip off to pipe the details.  That didn't turn out with the precision that I desired.

So I pulled out some MMF, rolled it out, and cut it with the large side of a piping tip.  I stretched it into an oval and cut one side off.  Then I added it just like you normally would with a cake.  I used the other side of the tip for the eyes.  The beak was a triangle I made with my fingers.  For the eye dots use a food coloring marker.  The I used a straw I cut length wise to put the details on the bellies.  Tada!

The girls loved them.  We all ate more than we wanted, but I think we burned it off dancing so it was okay.

This also could easily be transformed for Easter bunnies or spring chicks.

Many thanks to Bakerella who is far more advanced than myself in this art.  I probably got the idea from some of her sister bakers at some point too, although I couldn't find a tutorial when I was looking.
Posted by Libberlicious at 9:21 AM