Not too long ago I stumbled upon "I am baker", the blog.  I loved her vertical cake tutorial.  Mostly because I have an inappropriate obsession with French pastries.  Vertical cakes remind me very much of the beautiful designs seen on so many sophisticated cakes in patisserie shops.  I'd seen the Cake Boss do a checkered cake and it seemed more involved, but the vertical cake was a perfect compromise.  Naturally, I had to try it.
Maybe, I should have a reason for making cake (silly, I know).  Well conviently, I knew someone have a birthday soon and our church does a weekly potluck.  Who better to force cake on than your church members and your friends?!  Most will be kind enough to compliment you, boosting your self esteem, and the rest will be honest with your mistakes without breaking your heart or refusing to order from you again. Perfect!
So following Ms. Amanda's tutorial I made the cakes using my own recipes.  Here is what I learned.
I decided to make my husband's favorite recipe from scratch.  What I call Vanilla Nut, or Yellow cake from scratch.  I made it with almond milk, which I do often for us since we don't typically drink regular, cow milk.  It adds to the "nut" factor (I also put about 1/2 teaspoon of almond extract in it).  It's a typical scratch cake: cream butter and sugar, whisk dry ingredients, etc. 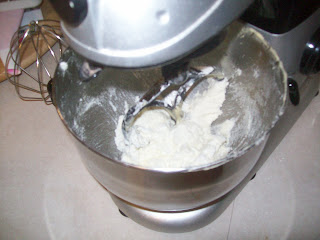 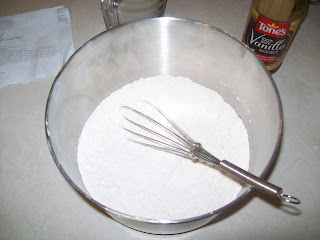 Notice in the picture above that I used "real" vanilla, rather than imitation.  I've noticed that imitation vanilla doesn't have as pure or as tasty of a flavor compared to its counterpart, at least in cakes.  If you aren't a cake snob or concerned about artificial flavor addititves and you want to save some cash, use imitation.  I'd wage to say no one, not even cake snobs would know the difference. 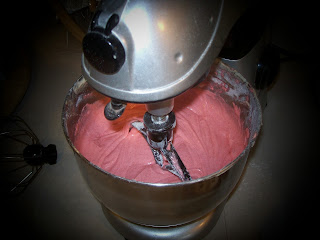 I baked the Vanilla Nut cake in two 9 inch pans.  While that baked I made a raspberry cake using the same recipe, but substituting raspberry flavoring for the vanilla and almond flavor.  Raspberry cake should be pink too, right?! 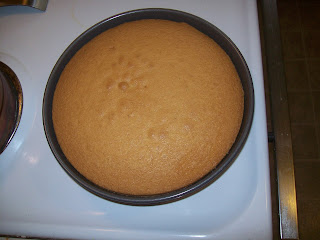 When they finished baking they looked like this.
My cakes were almost level, but they have a "skin" on them which I typically rub or peal off when they're cool.  It's a texture thing for me.  And I saw a French baker do it to his sponge cakes.
*Make sure you grease and flour your pans well and/or use wax or parchement paper in the bottom of you pans for easy release.  Also, smooth out the tops of the batter in the pans prior to baking to decrease domed tops. 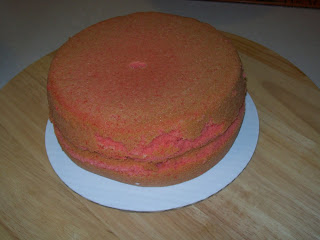 Now, the original tutorial said to level them, stack them within 5 minutes, and put them in the freezer for several hours.  I believe this is to assist in adhering to one another.   However, I don't feel this is absolutely necessary as there are other ways to assure adherence.  Also, because I tried to get them out so fast, I forgot to run a knife along the edges on the raspberry cake.  When a cake is warm it is also more delicate and some of the sides longed to be with the pan more than they longed to be in my belly.  See where it's messed up?  No worries though, frosting covers a multitude of sins (on cake, not you, so don't cover yourself or your spouse in frosting.)
She also said to put simple syrup at various stages on the cakes.  I skipped this.  I was fearful for this particular recipe for it imparting too much sweetness, making it less stable for carving, and adding unnecessary calories.  Now, it's a flippin cake.  Calorie counting was kinda silly so forgive me.  In hindsight, the simple syrup was a necessity FOR the stability.  It would have adhered the pieces together and I could have let the cake cool more which is an absolute must for more delicate cakes.  (A box cake would have crumbled had it not cooled for more than 5 minutes being handled that much.)


I  froze the cakes overnight.  I cut the cakes the next morning in the circles with a VERY sharp knife, not a serated one to reduce crumbs.  I was very careful when I separted the layers because I knew I would have missed spots cutting the circles. 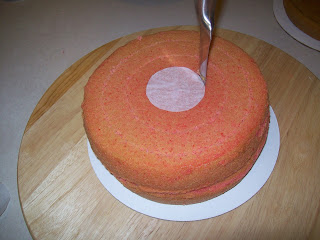 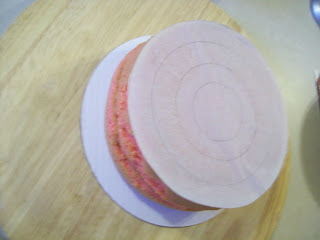 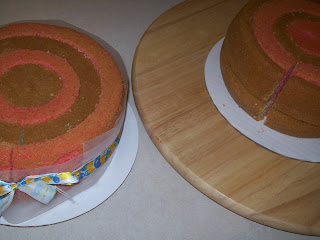 I assembled the two cakes and refroze.  One cake I froze until the end of the week (wrapped up).  The other I "dirty frosted" and then took to a cake class to frost and begin decorations.  I actually then froze it, also for a week.
*This is when I should have simple syruped the cake a bit between the layers so they would have stuck together better when we cut it to eat it.
I used a basic buttercream recipe, not a smooth meringue buttercream.  In general, I don't have problems with this recipe, but as I've been making flowers I've noticed that this recipe will leave "feathered" flowers.  They might look more like they do in nature, but I dislike it very much so.  I mean, look at the original cake from Amanda.  It's breathtaking.  The roses are perfect.  So, if you attempt it, use a creamier buttercream, or heck, cheat and use canned frosting.
﻿﻿﻿﻿﻿﻿﻿﻿
﻿﻿﻿
﻿

If you are doing the roses all over your cake, it's not necessary to smooth the frosting because you won't see it anyway.
﻿
﻿For the birthday cake I put a buttercream blue bird on it.
For the church cake I used my 1M tip as suggested and did the roses.  People seemed rather impressed with the roses, which was flattering considering it wasn't my idea and it was ridiculously easy to swirl frosting all over it.﻿﻿
﻿
﻿ ﻿﻿﻿﻿﻿﻿﻿﻿﻿﻿ ﻿
﻿﻿﻿﻿﻿
﻿﻿﻿
﻿﻿
﻿﻿

﻿﻿﻿Here is the inside.  Cool, huh?  But see how the layers anen't snug?  I think the simple syrup would have fixed that.  It might not be necessary with a less dense cake but this one doesn't smoosh together.  Also, this one didn't fall apart as badly as the other for whatever reason.  We cut the other one up all at the same time and as people got thier pieces it separated a bit.

Now you try.  People will think you are an absolute genius.

Posted by Libberlicious at 9:48 AM