I like easy, healthy dinners.  Cake is an easy dinner, but not the healthiest.  So, although I didn't bake it, I did make a mostly healthy dinner last night.  There are parts of it you could bake yourself, but like I said, I like easy dinners.  I don't have children yet, but I already know what it's like to so busy you don't have time to think.
At any given momment, I have a running list of everything I need to get done at work and home.  I need to: run that experiment, iron hubby's work clothes, do the dishes, make that frosting, grab milk from the store, get something made for the church pot luck, call the insurance company, call my mom, call sissy, who's birthday is next week?, what time is family dinner?, omg I just saw the funniest thing-gotta text Tomato and Liverpool, did I tell my hubby I appreciate him today?, ugh I've eaten too much bad stuff I need to workout, I want to nap, what did I need to do in the lab?.....  Yeah, the list is endless.  No, you aren't the only crazy person out there and your list is even bigger if you have babies!
So, like I was saying.  I made dinner.  Hummus and veggie stuffed pitas with falafel.  These are vegetarian, as I'm a vegetaria.  (I read A LOT of disturbing research articles and I have an over active imagination.  Plus, it's cheaper and allows me to consume those extra calories in dessert.)  I can't always find the flavor of hummus I like in a carton big enough for two people so I made my own.
Here's how:
Ingredients
2 cans of chickpeas, aka garbanzo beans, drained
1/4 cup of water
1/2 cup of your favorite oil based dressing--I've used a few flavors: Greek, Ginger and Sesame, Tomato Bruschetta, etc
1 TBS of lemon juice, up to 3 for taste preference
1 TBS of tahini paste (optional and not recommended if doing dressing with sesame already in it)
1 TBS of chopped garlic (optional)
1/2 teaspoon of salt (if you have cardiovascular disease, do not add this, the beans have enough, you addict)
*If you do not use an oil dressing, you will need to add 2 TBS of olive oil and another 1/4 cup of water.


After you have drained the chickpeas, you can rinse them if you prefer.  This removes all that, questionable preservative liquid they're in and will reduce any, uh, discomfort associated with eating beans.  I do this for all canned beans.  It helps keep the romance alive in my marriage, I think.  Dump the beans into a food processor or a blender.  I used a blender, as I don't have room in my teensy kitchen currently to use my food processor on the counter.  Remember, beans are good for you.  They have protein AND fiber, which is good for your stressed out arteries.  This also means they are filling, just like the meat you normally eat.  Unlike the meat you normally eat though, these little kernals of delish are lower in fat, among other things.

Add all your other ingredients, as well. Now here, are some pitfalls I have encountered.  Perhaps because I use a blender.  If the liquid isn't in there, the beans won't blend.  You may have to STOP the blender and use a small, flexible spatula to assist the process by gently stirring.  Generally, I have to do this 3-4 times because I don't want chunky hummus.  Using a potato masher doesn't work.  The "skins" of the beans elude this device.  So, when you are done, your hummus should resemble this.  Refridgerate it.  It's ready when you are!
Next I wanted to saute some fresh squash and zucchini up.  Alas, it had been wrapped up in a plastic bag with no air but lots of moisture.  It was rotten.  Now what?!  I was in lounge wear and I didn't want to run across town since I was going to have to do that later for a class.  Gotta save your gas money in this economy.  So I pulled out the frozen mixed veggies and some frozen califlower.  I did the not as healthy microwave, rather than the steam or quick saute.  It was easy though!
While that nuked (how appropriate a term), I took a falafel mix I found at Wal-Mart in the ethnic food aisle and followed its directions.  It says to roll it into 1 inch balls, so I assumed it meant with my bare, clean hands, but that was so darn messy I think its is better to use a tiny ice cream or cookie scoop.  I don't have that .  I used a spoon.  My falafel balls did not look near as pretty as the guy from Jordan down on the town square, but it was my first time.
Now since, those tasty little treats are cooked in oil, I drained them on a finely knit kitchen towl to reduce the impact on my muffin top.
After that, I took my pita bread, store bought, rather than made fresh (I told you I cheated) and put in the chilled hummus, some veggies, and low-fat feta cheese with the falafel on the side.  A-MAZING.  And good for you too! 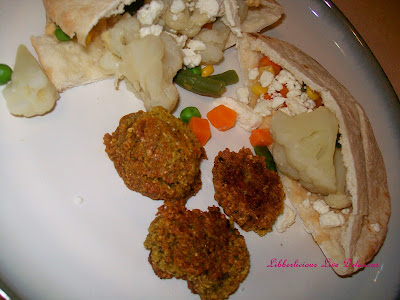 Posted by Libberlicious at 9:44 AM